Inspired by EasyGUI, designed for PyQt 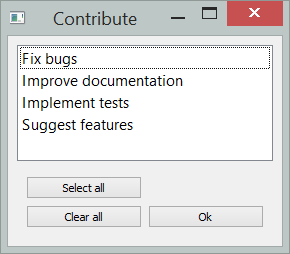 EasyGUI_Qt is a module for simple and easy GUI programming in Python.

Officially, this is a project that targets only Python 3. However, I have now decided to attempt to provide some support for Python 2. Other than some unicode issues, all widgets should work with Python 2.

Like the original EasyGUI, EasyGUI_Qt seeks to provide simple GUI widgets that can be called in a procedural program. EasyGUI_Qt is NOT event-driven: all GUI interactions are invoked by simple function calls.

The archetype is get_string(message) which pops a box whose purpose is exactly the same as Python’s input(prompt), that is, present the user with a question/prompt, have the user enter an answer, and return the provided answer as a string. Thus easygui_qt.get_string() can be used as a drop-in replacement for input(). Similarly, instead of using a print() function to display a message, show_message() is used which pops a message window; however, note that unlike print, show_message interrupts the flow of the program and require some interaction from the user for the program to continue.

Unlike the original EasyGUI, which sometimes used cryptic names like msgbox or ynbox, EasyGUI_Qt attempts to use descriptive names which follow PEP8 convention. Thus, instead of msgbox, it uses show_message; instead of ynbox, it has get_yes_or_no. Most function names start with either get_, show_ or set_.

EasyGUI_QT is based on PyQt; it leverages the available dialogs that come with PyQt whenever possible. This makes it possible to have automatic translation of some GUI elements (such as text on standard buttons) provided the locale is set correctly and that the local distribution of PyQt includes the appropriate translation: when EasyGUI_Qt runs, it scans the standard PyQt location for translation files and note which ones are present and can be used when the locale is set.

An attempt is made at avoiding duplication of essentially identical functionality. Thus, multiple selections from a list of choices is done only one way: by using a dialog where choices appear as labels in text and not labels on buttons.

The following is an incomplete lists of a few cross-platform projects that share some similarity with EasyGUI_Qt, but use back-ends other than PyQt

There are quite a few lesser known projects but none that seem to be actively supported. If you are aware of other projects that should be mentioned, do not hesitate to contact me and let me know.